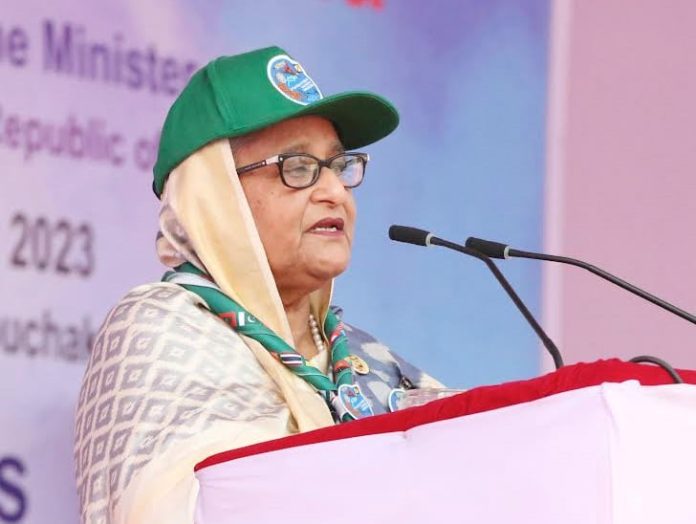 Dhaka, Jan 25: Prime Minister Sheikh Hasina on Wednesday stressed the need for strengthening the scouts movements involving each of the students  as it helps make children worthy to lead Bangladesh towards a developed, prosperous and smart country by 2041. 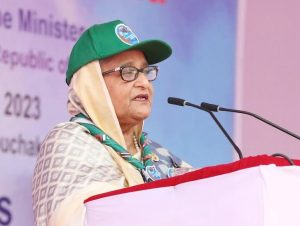 “I want to groom every child as a worthy citizen of the country. —scouts have given moral and life-oriented education to them. Members of the scouts are being developed as patriotic and conscious citizens with a mentality of rendering services,” she said.

The Prime Minister said she wants to strengthen the scout movement more prominently by providing every student in each of the educational institutions across the country with scout training as it helps build children with an open mind that is required to stay away from militancy, terrorism, drugs and corruption.

Briefly describing her government initiatives to strengthen the scout movement in the country, she said her government would build scout buildings and training centres in each upazila and district.

The Prime Minister hoped that the world scouts jamboree would be held in Bangladesh in future and asked all concerned to take preparations to this end.

At the function, the Prime Minister distributed the highest award for the scouts ‘Shapla Cub Award’ that included a certificate signed by her and a batch among 12 regional winners.

Posts and Telecommunications Division Secretary Abu Hena Morshed Zaman and Director General of the Directorate of Posts Md Harunur Rashid were present on the occasion.

A total of 11,000 participants, including 8,000 scouts, 1,000 unit leaders, and International Service Team members from India, Nepal, the Maldives, the Philippines, Scout China (Taiwan), Thailand, South Korea, the USA, Germany and Canada participated in the nine-day event which will conclude on January 27.

Sheikh Hasina said, “Bangladesh is now a developing country. We will no more get stuck there rather march towards for building a hunger-and poverty-free developed, prosperous and Smart Bangladesh by 2041

“Today’s children will be the guardians of that Bangladesh (smart Bangladesh). Everyone has to be grown with an open mind and needs to be free from all sorts of corruption, superstition, fanaticism and terrorism,” she added.

Referring to standing by the people in every disaster that included the recent Covid-19 pandemic by the scout members, she said she has confidence in today’s children, teens and youths that they would take Bangladesh to its desired destination.

She called upon all the children to build Bangladesh with the spirit of the Liberation War so that the blood of millions of martyrs do not go in vain and the result of the war reach every doorstep.

The Prime Minister said, “I want to give a safe and meaningful life to the children and teens of our country as they’re the guardians of tomorrow’s Bangladesh.”

She said whenever she comes amid the children, she finds her 10 year-old youngest brother Sheikh Russel, who was assassinated along with his father, mother, brothers and sisters-in-law on August 15, 1975, among them.

About the government measures to spread scouting across the country, she said they have been implementing Expansion of Scouting in Bangladesh and Construction of Scout Satabdi Bhaban Project involving Tk 140 crore, Construction of Sylhet regional scout Bhaban in Maulvibazar district Project with Tk 48.23 crore, Construction of Cumilla regional scout training centre, Lalmai project with Tk 48.53 crore and Expansion of Cub Scouting in Primary Schools Project –Phase IV with Tk 355.40 crore.

Besides, she said, a 95-acre land has been allotted for the National Scout Training Center, Mouchak, Gazipur, adding that the government allotted lands for construction of Scout Bhaban and training centres in different regions and districts.