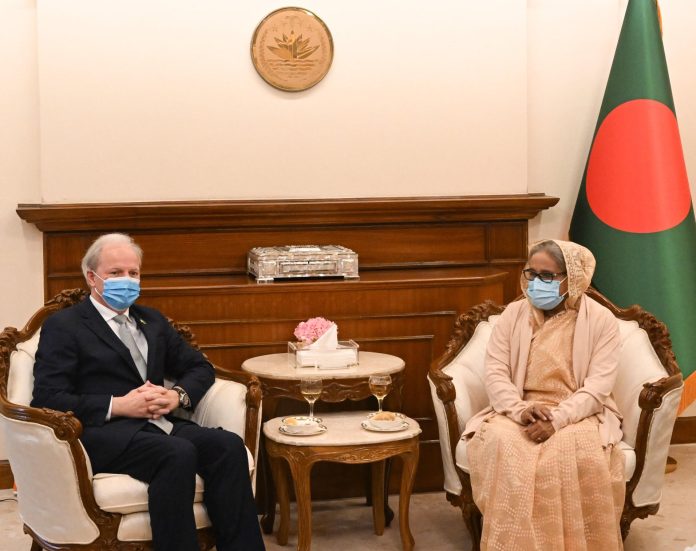 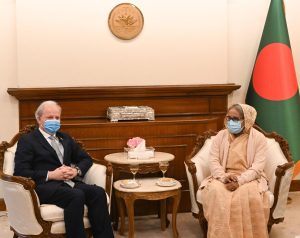 “Help developing countries like Bangladesh to face the existing crisis arisen from Covid-19 pandemic and Russia-Ukraine war,” she said while visiting WB Managing Director (MD) for Operations Axel van Trotsenburg paid a courtesy call on her at her office here this morning.

PM’s Speechwriter M Nazrul Islam told a news briefing after the call on.

Trotsenburg called Bangladesh’s development as “incredible” and assured of staying beside Dhaka in its development spree.

“We have been remaining beside Bangladesh since 1972 and will continue support in its development efforts,” he said.

He said, “Per capita income of Bangladesh was only 50 USD while it has now increased to 2824 USD”.

Trotsenburg said the prime aim of his visit to Bangladesh is to further strengthen the existing relations between Dhaka and WB.

Stating that the developed countries are mainly responsible for climate change impacts, Sheikh Hasina called for fulfilling their pledges with providing their promised money to the climate fund.

“But they (developed countries) are not complying with their promises,” she said.

The prime minister briefly described her government’s steps to overcome the challenges arisen out of the climate change.

She said her government formed the climate trust fund with its own finance alongside taking measures for massive afforestation, building green belts and sustainable housings for vulnerable people and implementing Delta Plan-2100 to give the new generations developed life.

The premier said Bangladesh saw fast development in the last 14 years due to having political stability here and her government’s tireless efforts to implement its vision to give the countrymen a beautiful and improved live as envisioned by Father of the Nation Bangabandhu Sheikh Mujibur Rahman.

Prior to the Covid-19 pandemic, she said Bangladesh had continuously achieved over 8 percent GDP growth.

The prime minister said the developing countries have fallen into trouble for skyrocketing price of fuel oil, foodstuff and transportation costs due to the Covid-19 pandemic and the Russia-Ukraine war.

She also said, “After breaking out of the pandemic, the GDP growth has declined and there were some impediments on the way of Bangladesh development which is now being recovered”.

Trotsenburg said developing countries like Bangladesh would have to face some challenges due to Covid-19 pandemic, Russia-Ukraine war and impacts of climate change.

He said the developing countries should generate employments for new generations to overcome challenges which is required to accomplish the sustainable development goals.

Trotsenburg arrived here on Saturday on his maiden three-day official visit to Bangladesh.