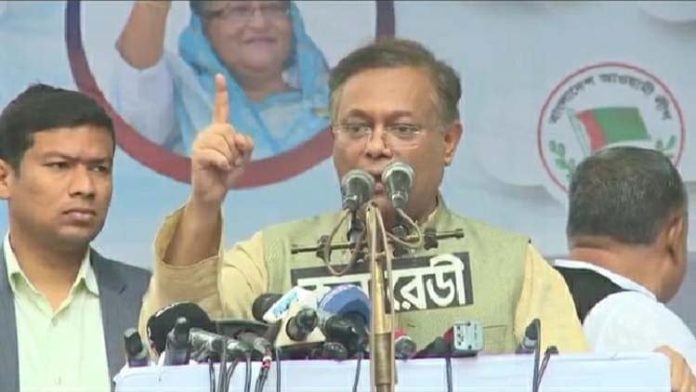 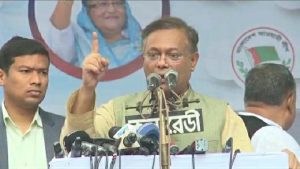 “The rally that our party (AL) is holding today and the rallies that we have held in different parts of Dhaka city are peace rallies. But the rallies that BNP is holding at different places, including Naya Paltan and Press Club, are aimed at creating unrest in the country. This is the difference between our (AL) and their (BNP) gatherings,” he said.

The minister made these remarks while speaking on the occasion of ‘the peaceful sit-in programme protesting the terrorist activities and anarchies of BNP-Jamaat’ organised by Dhaka City South AL at Bangabandhu Avenue here.

Noting that BNP’s ill attempts of creating turmoil and appeasing foreigners will bring no outcome, Dr Hasan said, “Our leaders and activists always remain alert. Due to our peaceful rallies a cautious position, BNP could not create unrest in Dhaka city and elsewhere in the country”.

“Assistant Secretary of State of the United States during a visit in Dhaka told that the situation in Bangladesh has improved a lot and the United States wants to give training and support to the law enforcement agencies, including RAB, Police and BGB men”, the minister said adding that this is the latest announcement of the USA.

“So, BNP’s efforts to appease foreigners didn’t bring any outcome. Today, BNP held a joint rally with 54 political parties. There were 24 people on the stage and 10 people in front of a 12 or 14 parties programme in front of the Press Club. BNP has also held rallies at some other places – there are 14 parties and not more than 100 people,” Dr Hasan said.

Mentioning that BNP had said the government could not build the Padma Bridge, the AL leader said, “Now they cross the Padma Bridge secretly and going over the bridge though they speak against us”.

BNP also spread propaganda against coronavirus vaccination, he said, adding later the leaders of BNP took vaccines secretly. “Though the whole of Bangladesh is happy over the launch of Metrorail, BNP is not happy. Now we are waiting to see you getting on board the metro rail,” Dr Hasan said.

Referring to the AL leaders and activists, Dr Hasan said, “BNP is like snakes. It will bite whenever it gets a chance. So, you should remain alert”.

He urged all to take to the street and remain alert till the elections and resist those who will try to create anarchy in the country.

“We will return home only after getting the victory in the polls and making Sheikh Hasina prime minister again,” Dr Hasan said.