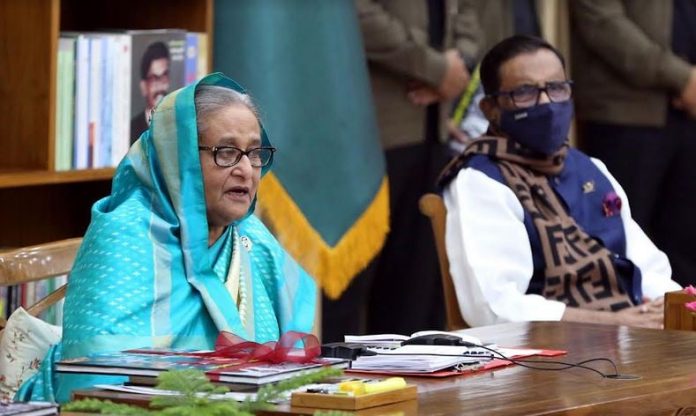 Dhaka, Jan 14: Prime Minister Sheikh Hasina on Saturday firmly said that Awami League (AL) always works for the welfare of the nation as per the promise given to the people and the countrymen are getting its benefits.

“AL always keeps its promise what it gives to the people —We always work for the welfare of the nation and people are getting benefits of it,” she said.

Sheikh Hasina, also the President of the ruling AL, said this while delivering her introductory speech at the joint meeting of the AL National Committee, Central Working committee and Advisory council at her official residence Ganabhaban.

She mentioned that every time they formulated the national budget keeping in mind the election manifesto to implement the plans according to the promises made to the people.

The prime minister said when the AL government formulates a five-year plan, it does it keeping in mind its election manifesto. “It means we keep the promise we give to the nation,” she said.

Coming down on a section of people who always criticizes the government unnecessarily, she said there are some people who don’t feel well although the AL government has developed the country a lot.

“They (a section of people) circulate different things. But, the changes that have come in people’s lifestyle (they don’t see). Moreover, we have improved the communication system including roads. Many people don’t want to admit it either,” she observed.

Regarding corruption, she mentioned that she has already told parliament to give her information where the corruption is going on.

“Give me information particularly, I will take action; It will not be done just saying from mouth,” she said.

Sheikh Hasina regretted that the matter of corruption is coming out from those people who are corrupts and Bangladesh became champion in corruption during their regime.

She also mentioned the microcredit business which plunges people into heavy burden of interest against their loans.

To this connection, she said the government is implementing the “My House My Farm” scheme and the people won’t need to take loans from these microcredit lenders with high interest rates.

Briefly describing the development activities of the government, the premier said through developing every sector of the country, her government has been able to reduce the poverty rate and generate employment heavily.

To this end, she mentioned the freelancing across the country, saying by freelancing youths can earn money staying home in their rural areas.

In the future, she said food items and processed food items, digital devices and small mechanical items will be included to country’s export basket.

“We will be able to increase exports through the investments that are coming in our one hundred economic zones across the country,” she added.

Sheikh Hasina also said that due to the pragmatic and timely steps of the government in the last 14 years, the country’s people are enjoying a better life now.

She said, “I don’t know whether any other government in Bangladesh has worked for the welfare of the people in this way.”

She pointed out that her government is taking the country forward in a planned way to fulfill the wishes of Father of the Nation Bangabandhu Sheikh Mujibur Rahman.

The prime minister said the AL government is fulfilling what Bangabandhu had wanted to do for the development of the country and change the fate of the people.

She said that according to the plan of Bangabandhu, steps have been taken in various fields including science-based agriculture, expansion of education, improved and people-oriented health services, boosting food production and increase in power generation.