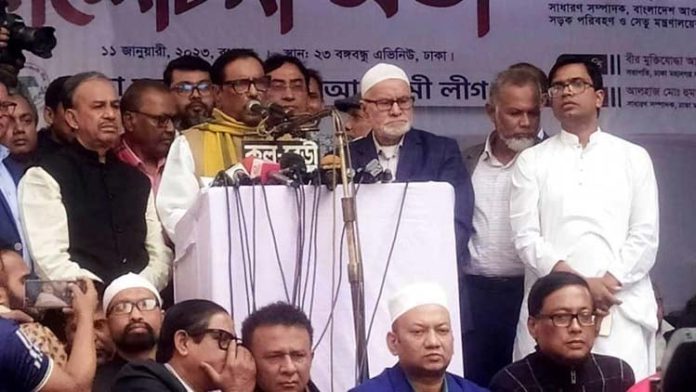 Dhaka, Jan 11: Awami League General Secretary Obaidul Quader on Wednesday said if BNP comes to power again, the spirit of the Liberation War will be destroyed. 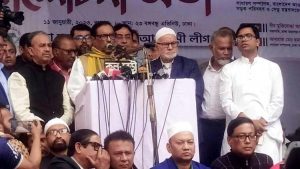 “We cannot let BNP go to power as it is the patron of communal forces and militancy,” he told a rally, organised in front of the Awami League’s central office at Bangabandhu Avenue, here.

Dhaka South City unit of the AL organised the rally on the occasion of the historic Homecoming Day of Father of the Nation Bangabandhu Sheikh Mujibur Rahman.

Quader, also the Road Transport and Bridges Minister, said those who put the country at the edge of destruction are now talking about the repair of the country.

Claiming that Prime Minister Sheikh Hasina is repairing the country, he said if BNP assumes power once again, there will be no longer of the country’s independence and it will strip democracy. “We cannot leave the country at their hands”.

The AL general secretary reiterated that there would be a game against corruption, looting and misrules of BNP.

“The game will be played against those who have made the chests of hundreds of mothers empty.

Sheikh Hasina is repairing what you (BNP) have destroyed while in power,” he said.

Quader said Sheikh Hasina inaugurated over 100 bridges and 100 Highways simultaneously in one day. “Sheikh Hasina can do and only Sheikh Hasina would be able to do. Let us strengthen her hands,” he added.

Mentioning that Bangladesh had started a good journey on January 10 in 1972, he said another name of Bangladesh is Sheikh Mujibur Rahman.

“Bangabandhu will remain (alive in the hearts of people) as long as this country exists. On the day of the history, the independence was fulfilled,” the road transport and bridges minister said.

About the BNP’s mass sit-in programme, he said there was a normal rally at Paltan, while there were a total of 24 people at Bijoynagar rally of the 12-party alliance rally.

The seven-party alliance held a meeting at press club to get chairs, while there were 20 people on the stage against 15 people, including journalists, sitting in front of the stage.