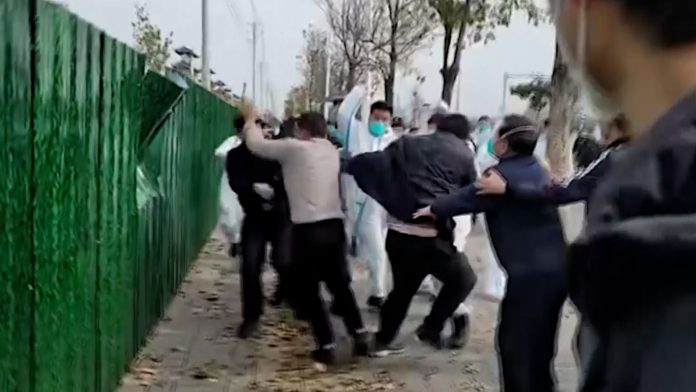 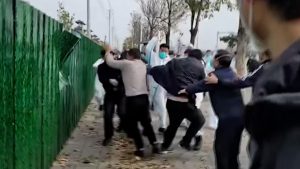 The videos show hundreds of workers facing off with law enforcement officers, many in white hazmat suits, on the Foxconn campus in the central Chinese city of Zhengzhou. In the footage, now blocked, some of the protesters could be heard complaining about their pay and sanitary conditions.

The scenes come days after Chinese state media reported that more than 100,000 people had signed up to fill positions advertised as part of a massive recruitment drive held for Foxconn’s Zhengzhou plant, CNN reported.

Apple (AAPL) has been facing significant supply chain constraints at the assembly facility and expects iPhone 14 shipments to be hit just as the key holiday shopping season begins. CNN has contacted the company for comment on the situation at the plant.

A Covid outbreak last month had forced the site to lock down, leading some anxious factory workers to reportedly flee.

Videos of many people leaving Zhengzhou on foot had gone viral on Chinese social media earlier in November, forcing Foxconn to step up measures to get its staff back. To try to limit the fallout, the company said it had quadrupled daily bonuses for workers at the plant this month.

On Wednesday, workers were heard in the video saying that Foxconn failed to honor their promise of an attractive bonus and pay package after they arrived to work at the plant. Numerous complaints have also been posted anonymously on social media platforms — accusing Foxconn of having changed the salary packages previously advertised.

In a statement in English, Foxconn said Wednesday that “the allowance has always been fulfilled based on contractual obligation” after some new hires at the Foxconn campus in Zhengzhou appealed to the company regarding the work allowance on Tuesday.

Workers were also heard in the videos complaining about insufficient anti-Covid measures, saying workers who tested positive were not being separated from the rest of the workforce.

Foxconn said in the English statement that speculation online about employees who are Covid positive living in the dormitories of the Foxconn campus in Zhengzhou is “patently untrue.”

“Before new hires move in, the dormitory environment undergoes standard procedures for disinfection, and it is only after the premise passes government check, that the new employees are allowed to move in,” Foxconn said.

“Regarding violent behaviors, the company will continue to communicate with employees and the government to prevent similar incidents from happening again,” Foxconn said in a statement in Chinese.

The Zhengzhou facility is the world’s largest iPhone assembly site. It typically accounts for approximately 50% to 60% of Foxconn’s global iPhone assembly capacity, according to Mirko Woitzik, global director of intelligence solutions at Everstream, a provider of supply chain risk analytics.

Apple warned earlier this month of the disruption to its supply chain, saying that customers will feel an impact.

“We now expect lower iPhone 14 Pro and iPhone 14 Pro Max shipments than we previously anticipated,” the tech giant said in a statement. “Customers will experience longer wait times to receive their new products.”

As of last week, the wait time for those models had reached 34 days in the United States, according to a report from UBS.

Public frustration has been mounting under China’s unrelenting zero-Covid policy, which continues to involve strict lockdowns and travel restrictions nearly three years into the pandemic.

Last week, that sentiment was on display as social media footage showed residents under lockdown in Guangzhou tearing down barriers meant to confine them to their homes and taking to the streets in defiance of strictly enforced local orders.

Thakurgaon, Nov 27: Three members of a family were killed after a bus hit a motorcycle on Thakurgaon-Baliadangi road at Palli Bidyut area in...
Read more

Thakurgaon, Nov 27: Three members of a family were killed after a bus hit a motorcycle on Thakurgaon-Baliadangi road at Palli Bidyut area in...
Read more