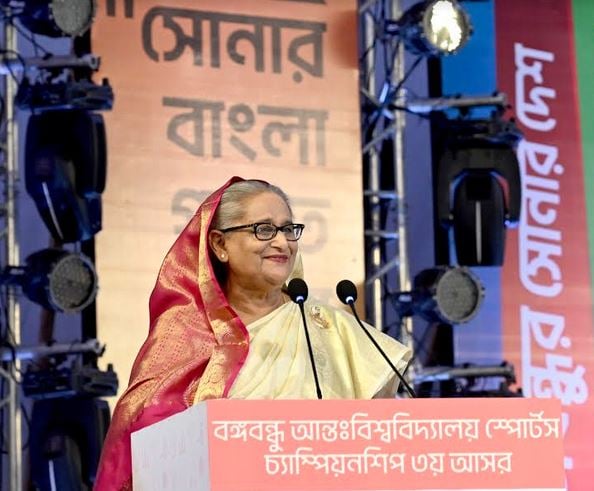 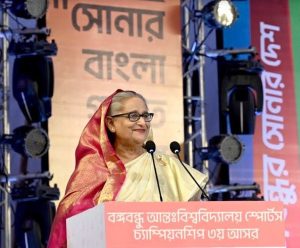 About holding nationwide inert-school, inter-college and inter-university sports competition, she said now children are blossoming through the competitions.

“Our boys and girls will sprout further through competitions – I think we can make more progress in sports on the world stage by taking part in the competitions,” she added.

The premier joined the programme organised by the Youth and Sports Ministry at Bangladesh Army Stadium, Dhaka.

“The Word Cup Football competition is going on, but we have no existence there which hurt us. When I get scope, I watch it and at the same time I think when our children will play in the competition,” she said.

The Prime Minister, however, expressed her hope that Bangladeshi boys and girls would play the tournament one day, saying that her government has been trying to create every scope to bring out hidden talent of the boys and girls despite having limitation.

Referring to the success of women in the SAAR and Asian games in both football and cricket, the Prime Minister said the girls are doing very well on the international stage and hoped that the boys will do the same.

She said her government has already established stadium at district level and is now building mini stadium at every upazila across the country to create scopes for holding competitions.

She said they have been arranging the Bangabandhu Inter-University Sports Championship since 2019 alongside the inter-school and inter-college sports competitions.

The premier said her government has taken an initiative to build BKSP in every eight division to train the sportsmen in a proper way.

She said the government has attached priority to training following the footsteps of Father of the Nation Bangabandhu Sheikh Mujibur Rahman as Bangabandhu sent Bangladeshi players to Germany, India and other countries for training.

The Prime Minister said her government has taken initiatives for the overall development of sports after assuming office as the sports and competitions alongside cultural practices are showing the youths choosing the right paths shunning the ways of drug, militancy and terrorism.

She said, “We don’t want drugs, militancy or terrorism. We believe in peace, development and progress. I know the government’s supports are always needed for education and sports and cultural practices.”

Describing Bangladeshi children as very talented ones, she said if they even get a little scope, they can turn impossible into possible.

She described herself as a member of a sports-loving family as her grandfather Sheikh Lutfur Rahman, his younger brother, and her father Bangabandhu Sheikh Mujibur Rahman were footballers and two brothers– Sheikh Jamal and Sheikh Kamal, sisters-in-law Sultana Kamal and Parvin Jamal were sportsmen.

Being a sports-loving family, the premier said they would extend every possible support for the development of the sports.

The Youth and Sports Ministry arranged the 3rd edition of the sports competition with some 6,950 participants, including 1,850 females from the country’s 125 public and private universities under 12 events.

Some 720 medals were distributed among the best performers under the 12 events including football, cricket, athletics, volleyball, basketball, table tennis and badminton, kabaddi and chess.

Daffodil International University has become the champion in the 3rd edition of the competition, while Dhaka University won the fair play award.

The joint best male athletes are Ashif Reza and Mahumudun Nabi of Uttara University and the best female athlete is Tamanna Akter of Islamic University (Kushta). They received gold medals from the Prime Minister.

Earlier, the PM enjoyed the 2nd half of the women’s football final match when Gono Bishwabidyalay and American International University of Bangladesh (AIUB) ended by 3-1.