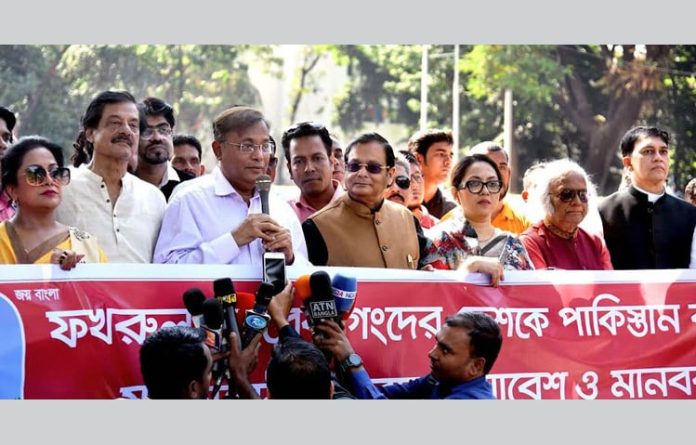 Dhaka, Nov 21: Information and Broadcasting Minister Dr Hasan Mahmud on Monday said BNP and its leaders are giving shelters, patronising and financing the militants in the country and they (militants) are currently trying to rise up. 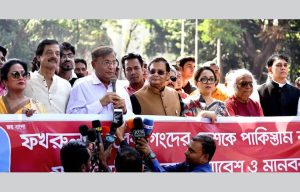 “When our government arrested the militants, BNP leader Begum Khaleda Zia had told that some people were arrested and detained and later they were called militants after growing up their hair and beard. But, actually there are no terrorists,” he said.

The minister added: “Accused criminals were snatched away from the court, attacks were carried out at a police box in Chattogram and the nameplate of Kanchpur Bridge was burnt. They have started arson attacks and anarchies again.”

Hasan said this while addressing a rally and human chain organised by Bangabandhu Sangskritik Jote (BSJ) in front of Central Sahaheed Minar in the capital.

Hasan said the militants, terrorists and fundamentalists are trying to rise up again with the patronisation of BNP. So, the incident of rising of militants and trying to create chaos across the country under the leadership of BNP is linked, he added.

He said BNP secretary general Mirza Fakhrul Islam Alamgir from his ancestral house in Thakurgaon few days ago had told that the ‘Pakistan regime was better’. In fact, Fakhrul’s father was a pro-Pakistani and he went into hiding for several days after the independence of the country, he added.

Even, the minister said, it was heard that Mirza Fakhrul also went into hiding for several days. And now, he (Fakhrul) is declaring that they would make the country independent for the second time by bringing back Tarique Rahman, he added.

In fact, he said, BNP wants to make the country Pakistan. “In protest of this, the BSJ has organized the human chain today and I think it is a proper arrangement,” said Hasan, also Awami League joint general secretary.

He said Tarique is also the symbol of lootings by ‘Hawa Bhaban’ and a convicted accused of the much-talked-about 10-truck arms case. They will carry out protests in the country, which means they will start arson attacks and burn people alive again under the leadership of Tarique Rahman, he added.

Everyone should resist them (BNP), said Hasan.

He said the Pakistani occupation forces had surrendered on December 16. The countrymen will compel them to surrender like the Pakistanis if the pro-Pakistani BNP men, including Mirza Fakhrul, try to create chaos in Dhaka on December 10 in the month of victory, said Hasan,

The minister said the people of the country would resist them.

He also urged all including artists and cultural personnel to resist the evil force.