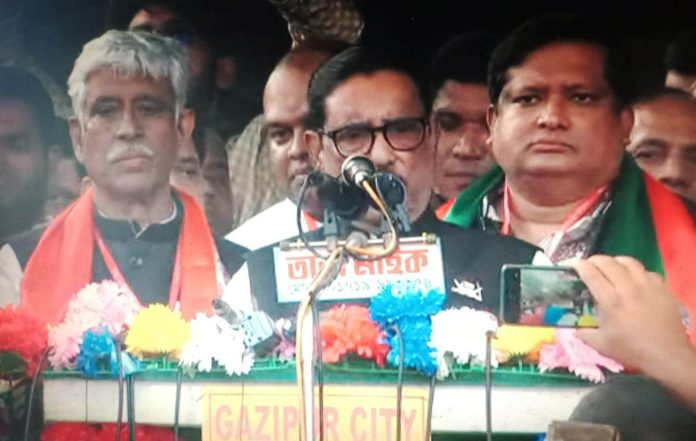 Gazipur, Nov 19: BNP will not get any benefit lodging complaints to their foreign lords as elections would be held here likewise other countries which have constitutional democracy, said Awami League (AL) General Secretary Obaidul Quader. 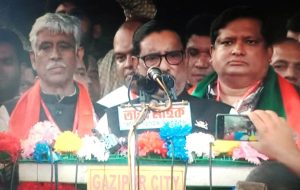 “BNP has become a ‘complaining party’ for lodging complaints to foreigners,” he told the triennial council of Gazipur City AL at the historic Rajbari ground at Joydebpur here today.

Quader, also road transport and bridges minister, said there is no scope to government changeover without polls.

Prime Minister Sheikh Hasina’s government will not make any kind of interference in polls, he said.

He said BNP is again making evil design to carry out arson terrorism as they torched the opening plaque inscribed with the name of Prime Minister Sheikh Hasina of Kanchpur Bridge on Dhaka-Chattogram highway.

Noting that BNP only says their rallies draw huge gatherings, he urged BNP secretary general Mirza Fakhrul Islam Alamgir to come to Gazipur to see the streams of people at the AL programme.

Highlighting different development works of the government, the minister said the country has witnessed unprecedented development and progress in all sectors including the implementation of mega projects like Padma Bridge.

“Padma Bridge has been built with domestic funds. So, BNP is suffering from jealousy,” he said.

Ajmat Ullah Khan and Ataullah Mandal have been made president and general secretary of Gazipur City unit of AL for three years in the council.