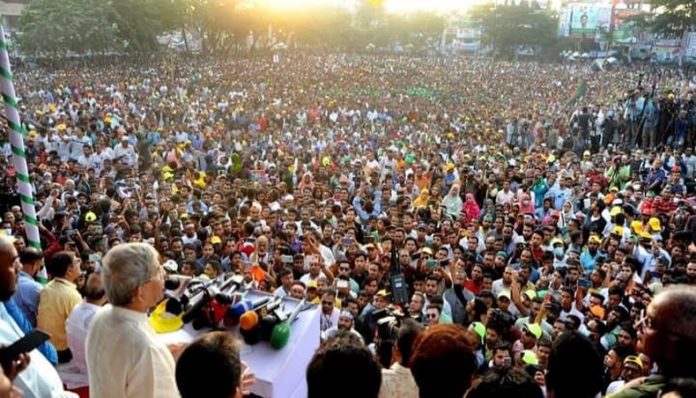 Sylhet, Nov 19: BNP Secretary General Mirza Fakhrul Islam Alamgir said in their Sylhet rally that the battle against the Awami League to restore democracy in the country begins from the city as did the liberation war which led to the birth of independent Bangladesh. 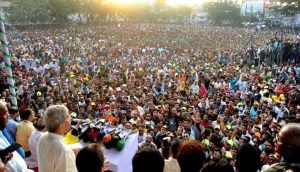 “The government has turned the country into a bottomless basket in the last 14 years and they will be tried for all the crimes they have done,” Fakhrul told the seventh divisional rally of the party at Sylhet’s Alia Madrasah ground Saturday (19 November).

“Common people including day labourers and farmers are struggling. Prices of everything have skyrocketed, because this government is not elected through people’s vote,” he added.

The BNP secretary general once again reiterated their call for a caretaker government to oversee the upcoming national polls.

“There will be no election in the country without a caretaker government and those who will oppose this will be branded as public enemies,” Fakhrul said.

“The prime minister keeps showing excuses of the constitution whenever we demand a caretaker government. But she was the one who amended the constitution to drop the provision. We do not accept this constitution,” said the BNP leader.

“Sheikh Hasina must resign immediately. An interim government and impartial election commission should be formed,” Fakhrul said Urging all parties to unite against the government.

Fakhrul said this government will be tried in the people’s court for the crime of taking away all human rights.

Addressing the massive crowd of BNP activists and supporters, who joined the rally defying all obstacles including a transport strike, Fakhrul said, “You have started a war, a war for freedom, for rights, for voting rights.”

Mirza Fakhrul Islam Alamgir alleged that the ruling Awami League government had usurped the rights of the people, gained through the Liberation War in 1971, and warned that the AL government would be tried in the people’s court.

‘The people will win in the war that they started against this government from the holy land of Sylhet,’ Fakhrul said.

A large number of BNP activists participated in the rally in Sylhet despite the transport strike and various obstacles in Sylhet and surrounding districts.

At this time, Fakhrul complained that the government had once again started ‘factious’ cases against BNP leaders and activists across the country.

He said that the demands of the BNP were immediate resignation of the AL government, dissolution of the parliament and formation of a neutral government during national elections.

He claimed that the government was threatening BNP in various ways and said that no threat would work anymore.

‘People came to the field to reclaim their rights to rice and vote,’ he said.

BNP Standing Committee member Gayeshwar Chandra Roy said that the party will start the movement to topple the government after the divisional rally in Dhaka on 10 December.

“The state of democracy today is like that of Ilias Ali (former BNP lawmaker who went missing in 2012). Ilias Ali is missing, so is democracy,” he said.

On the country’s economic condition, Gayeshwar said, “The government does not even have enough money in reserves to pay the interest on the loans it has taken. The government looted the reserves.”

Abdul Moyeen Khan, a member of BNP’s standing committee, said “We will return the power of the people to the people.”

BNP Vice Chairman Dr Zahid Hossain said, “People all over the country have woken up today. Sheikh Hasina will fall. People will win. Prices of goods will decrease. A non-partisan government will be established.”

BNP is set to conclude their series of divisional rallies through a mass gathering in the capital on 10 December.

Dhaka, Nov 30: The Cabinet Committee on Government Purchase in a virtual meeting has approved six proposals including two for procurement of soybean oil...
Read more
Nationwide

Chattogram, Nov 30: Police Bureau of Investigation on Wednesday recovered remains of five-year-old Ayat, who was kidnaped and murdered in Chattogram, from a canal...
Read more
Home