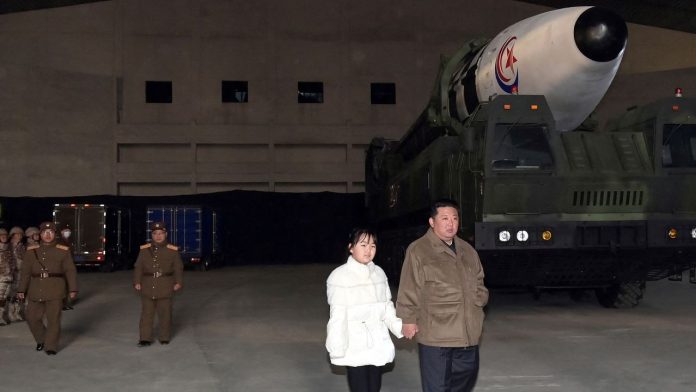 Intl desk, Nov 19: North Korean leader Kim Jong Un oversaw the launch of “a new type” of intercontinental ballistic missile Friday, alongside his young daughter, whose existence had not previously been confirmed. 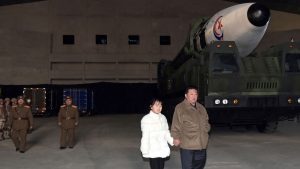 Striking photographs released by the state-run Korean Central News Agency (KCNA) appear to show Kim hand in hand with the girl, as the ICBM sits on its mobile launch platform nearby, CNN reported.

KCNA claimed that the “new” missile being viewed by the pair was a Hwasong-17, and said that it launched from Pyongyang International Airfield, flying a distance of 999.2 kilometers (621 miles).

Japan warned after the launch on Friday that the new missile appeared to have the potential range to reach the United States mainland.

Kim said the test was intended to “clearly demonstrate” his country’s ability to respond to what he termed the “hysteric aggression war drills by the enemies seeking to destroy peace and stability in the Korean peninsula,” according to the KCNA report.

North Korean leader Kim Jong Un and his daughter walk away from an intercontinental ballistic missile (ICBM) in this undated photo released on November 19, 2022, by KCNA.

“Kim Jong Un solemnly declared that if the enemies continue to pose threats to the DPRK, frequently introducing nuclear strike means, our Party and government will resolutely react to nukes with nuclear weapons and to total confrontation with all-out confrontation,” KCNA said.