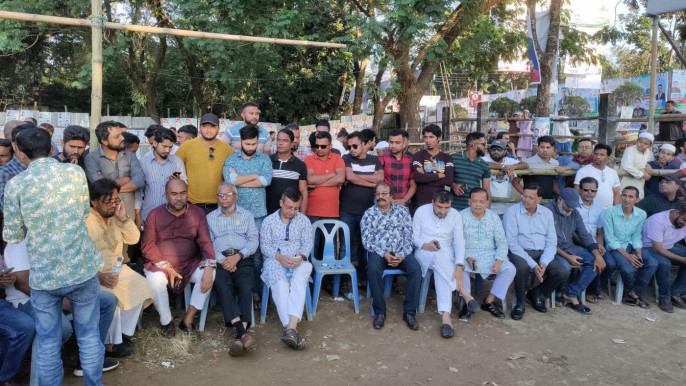 Sylhet, Nov 18: Sylhet BNP has been divided into two factions for a long time under the leaderships of former Finance Minister M Saifur Rahman and former lawmaker M Ilias Ali. 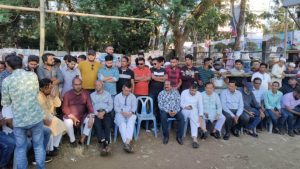 Although the leadership changed with the death of Saifur Rahman in 2009 and the disappearance of Ilias Ali in 2012, the party feud prevailed with new leadership in place.

Sylhet BNP is now divided under the party chairperson’s adviser Khandaker Abdul Muktadir and central committee member Sylhet City Mayor Ariful Haque Chowdhury. These two leaders and their followers were seen in opposite positions in all party activities in recent times.

But the divisional rally, due Saturday (19 November) in Sylhet city, united the two factions with all BNP leaders campaigning together for a month to make it a success.

Khandkar Abdul Muktadir has been active since the beginning of the campaign while Mayor Ariful Haque Chowdhury started campaigning for the rally soon after he returned from the US a week ago.

They are also in charge of convenors of two of the six sub-committees formed centering the rally. Despite their mutual differences, both the leaders were found working together in the campaign and preparation activities of the rally.

On Thursday (17 November), Muktadir and Arif were seen sitting side by side in Aliya Madrasa ground, where the Saturday’s rally will be held.

Not only these two central leaders, local leaders from district and upazila levels are working unitedly, forgetting previous enmity.

Several leaders of the district BNP said that strict instructions have been given to the leaders of Sylhet from the center to forget all enmity and work together to make the divisional rally successful.

They said a team consisting of top central leaders is staying in Sylhet to oversee the preparation and campaign activities. Besides, the top leaders sitting in Dhaka and even the acting chairperson of the party are supervising all the activities. As a result, all the leaders put aside all the mutual disputes and differences for the time being and entered the field unitedly.

Sylhet BNP leaders said they were inspired by the huge response of the people in favor of the rally in other divisions and in Sylhet. As a result, they forgot the internal conflict and joined the anti-government movement.

Abdul Ahad Khan Jamal, convener of Sylhet District Swechchasebak Dal and member of the last convening committee of the district BNP, said, “There is no conflict in the BNP. Being a large group, there is competition for leadership. Despite some minor differences, everyone is now united for the greater interest of the party and the country. There is no disagreement among anyone in demanding the fall of this government. As a result, all the leaders are actively in the field in this movement.”

According to BNP party sources, Khandaker Abdul Muktadir became the sole leader of BNP in Sylhet after the death of Saifur Rahman and the disappearance of M Ilias Ali. Closeness to the UK makes him more powerful. As a result, starting from BNP Chhatra Dal, Juba Dal, BNP and its associate organisations, the leaders who followed him had power.

However, after being elected mayor for the second term, Arif started to strengthen himself in the party. From this, his distance with Muktadir increases. Ariful Haque Chowdhury was in favor of senior leader Inam Ahmad Chowdhury even though Muktadi wanted the BNP nomination from Sylhet-1 seat in the last parliamentary elections. There is a discussion within the party that Arif is the one who brought former bureaucrat Inam Ahmed in the political field to stop Muktadhir. However, Khandkar Muktadir secured the party nomination that time.

But since then, the distance between Muktadir and Arif has increased. In recent times, the district and metropolitan BNP and its affiliated organisations have been seen giving separate candidates from the two constituencies.

However, these two leaders, who have gradually moved away, have come down in a row at the threshold of the divisional mass rally.

When contacted, city Mayor Ariful Haque Chowdhury said that there is no conflict in the party.

He said, “There is a practice of democracy within the party. So anyone can be a candidate, can suggest candidates. Workers may prefer different leaders. It is not a conflict. And even if there were minor problems, we all forgot them and entered the rally field successfully. Our goal is to turn Sylhet into a sea of ​​people on Saturday.”

In this regard, Khandaker Abdul Muktadir said, “There will be disagreements within the big party. That is the beauty of politics. The beauty of democracy. But forgetting all the differences, we are fighting to overthrow this illegal government. I have started the fight to return voting rights and security of life to the people. There is no disagreement between us on these matters.”