One killed, 15 injured in AL factional clash in Sunamganj 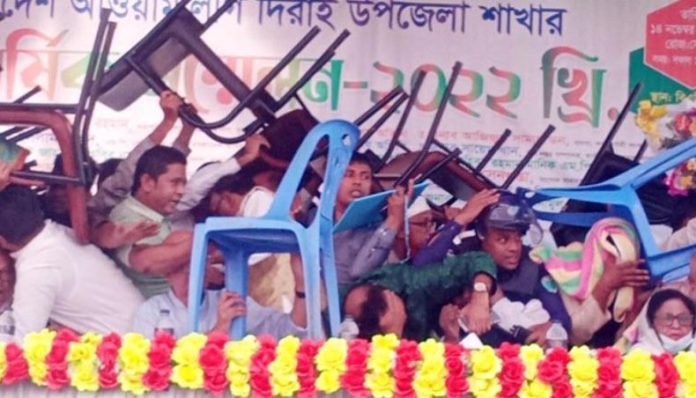 Sunamganj, Nov 14: A 35-year old man was killed and 15 others were injured in a clash between two groups of ruling Awami League during the conference of Dirai upazila unit of AL at BADC playground under the upazila in Sunamganj on Monday. 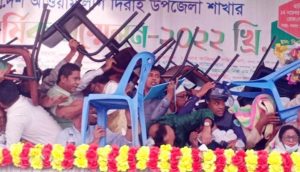 The deceased is Ajmal Hossain Chowdhury, a resident of Hospital Road of the upazila town, and the injured ones were taken to different hospitals and clinics, Dirai police station officer-in-charge Saiful Alam said.

AL leaders and police officials said that the conference began at the BADC playground in presence of AL presidium member Nurul Islam Nahid and organising secretary Ahmed Hossain at around noon.

At about 1:30pm, they alleged, a group of AL leaders and activists led by former upazila AL joint-general secretary and former Dirai municipality mayor Mosharraf Hossain came to the conference ground with a procession while tension created among both the groups.

The groups began to throw brick bats targeting each other, they said.

They said that seriously injured Ajmol was taken to Dirai Upazila Health Complex but he returned home.

Later, as he fell sick, he was taken to the hospital again and on-duty doctors declared him dead.

OC saiful said that the situation became normal in the evening and extra police forces were deployed in the area to avoid any further untoward incident.

AL leader Mosharraf Hossain could not be reached for comments after several attempts in the afternoon.