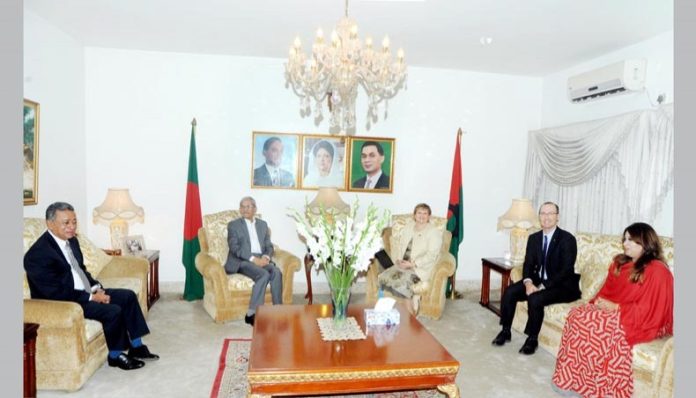 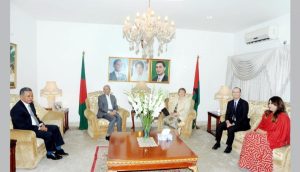 Nicholls arrived at the BNP chairperson’s Gulshan office at about 1:30pm and had a ‘closed-door’ meeting there with a BNP delegation, led by Fakhrul.

BNP standing committee member Amir Khasru Mahmud Chowdhury and organising secretary Shama Obaed were present at the meeting that ended at about 3:10pm

‘We had a very good discussion. We talked about all issues relating to Bangladesh’s present perspective, especially, human rights, our elections, and the rule of law and security of public life,’ he said.

‘Canada and some other countries always take a strong stance on these issues,’ he said.

He said that Canada had been bilaterally telling the Bangladesh government at different times that human rights had been violated in Bangladesh.

Like the people of Bangladesh, democratic countries, multilateral bodies, and human rights organisations all over the world, Canada is also concerned over many issues since it gives importance to democracy and human rights.

Asked what Canada said about the next polls, Khasru said that he could not elaborate on what they discussed inside. ‘We’ve discussed all the issues relating to Bangladesh’s current political perspective. But there is no scope to say elaborately what we discussed.’

He said that BNP had no reason to go to the next polls under the current government and BNP was strict on this stance.

He said that a caretaker government must be established ousting the current government for ensuring a credible election where people will be able to freely exercise their voting rights. ‘We’re least bothered about what Awami League, the Election Commission and others, say about the next polls.’

Khasru said that Bangladesh and Canada had long been maintaining diversified relations.

He said that Bangladesh exports goods worth about $2 billion to Canada as the country gave Bangladesh duty-free market access to Canada, for most goods, in 2003. ‘This facility was given during the BNP government and as the then commerce minister I negotiated it with Canada.’

Besides, the BNP leader said that Canada was also an important destination for Bangladesh to import many essential food items, including wheat, and pulses.  ‘Canada has also now become a popular destination for our children for studies.’

‘A good number of Bangladeshis have been living in Canada and they are contributing to that country’s economy and society,’ he said.