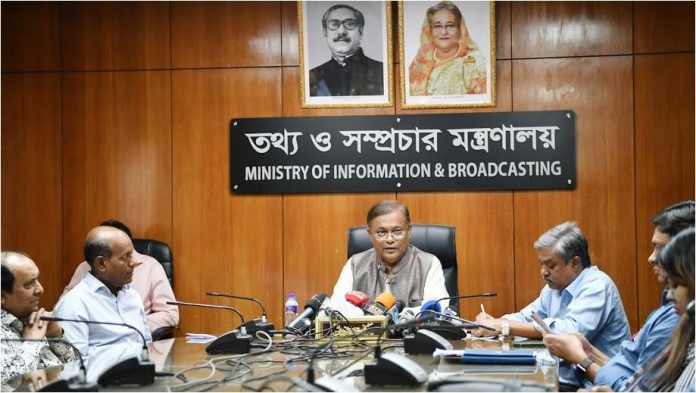 Dhaka, Nov 06: Information and Broadcasting Minister Dr Hasan Mahmud on Sunday said BNP had told that they would not go to the 2018 elections under the party government, but later, the party took part in the polls after muddling the water. 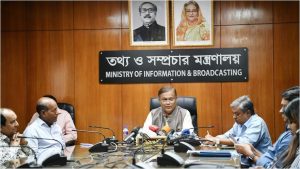 They (BNP) don’t accept anything easily, but they accept everything after creating troubles, he said to reporters while replying to a query after exchanging views with the leaders of Bangladesh Climate Change Journalists Forum (BCJF) marking the COP-27 at the meeting room of his ministry at Secretariat in the capital.

Hasan said this time too, the BNP is telling that they would not take part in the polls. But, the reality is that many BNP leaders are eagerly waiting to take part in the next polls, he added.

Referring to an exhibition titled ‘Agnisanthrasher Artanad’ organized by Awami League today at the National Museum, the minister said, “I just came here from the programme. The BNP’s arson terrorism victims, families of deceased and the cries of injured people brought tears to all there. The foreign envoys were there. I could not hold back tears. The journalists also couldn’t. Even, the premier too could not hold back her tears.”

He said all demanded the trial of the killings of their husband or their child or their father in their lifetime. The children of those fathers who were killed in 1977 without any trial said that they don’t know where the grave of their father is, he added.

The minister said the children have also demanded to the premier that they want to know where their father’s grave is and said the murders should be brought to justice.

He said Ziaur Rahman killed hundreds of soldiers without any trial in 1977 and his party, BNP, carried out arson attacks along with Jamaat. Not only those who went to the field and threw bombs, but the financer and those who gave orders should be brought under justice, said Hasan, also Awami League joint general secretary.

Earlier in the meeting, the minister said Bangladesh is the innocent victim of climate change as the country has no role in the change. The greenhouse emission per person per year was 0.2 tons 12 to 13 years ago in the country which is now 0.6 tons, he added.

“Twelve to thirteen years ago, greenhouse gas emission per person per year was 0.2 tons in our country. It has slightly increased to 0.6 tons now. The level has now reached four to five tons in rapidly developing countries,” said Hasan.

Bangladesh has no detrimental role compared to that, he said, adding the adverse effects of climate change are affecting the country much more than other countries.

He said the whole world is the victim of climate changes. But it is regrettably true that the global political leadership is now busy with the issue – who will join the NATO and who would not join the organization – instead of protecting the globe.

“We are busy fighting each other, destroying each other and also giving sanction and counter-sanction. The entire mankind is passing through a cataclysm and the existence is under threat. But they have no headache,” he added.

Hasan said, “Bangladesh’s main speech at the Climate Conference will be, ‘Please stop the war, instead of destroying each other, save the world together’. We, the helpless victims of climate change, must be helped as promised. These statements will be presented at the World Climate Conference which is starting from today.”