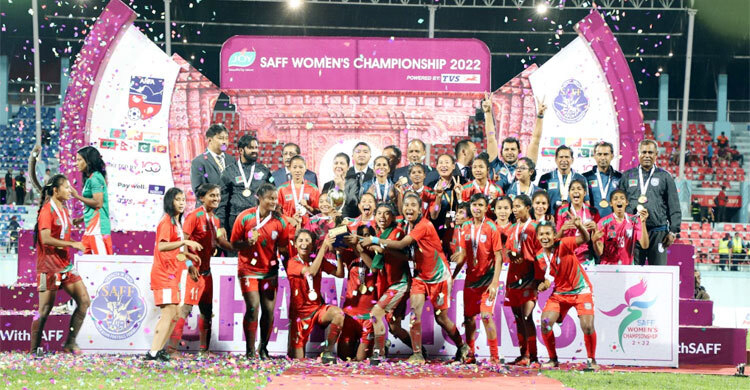 A Bangladesh Biman Flight, carrying the Bangladesh eve team, is expected to land at Hazrat Shahjalal International Airport at 1 pm.

The girls in red and green made the nation proud as they made history by claiming the South Asian football’s supremacy winning the SAFF title beating host Nepal by 3-1 goals in the final held on Monday.

Bangladesh started the tournament campaign with high as they blanked the Maldives by 3-0 in their group opening match and thrashed Pakistan 6-0 in their second match.

The Sabina and co. defeated five times SAFF Champions India by 3-0 goals to book their spot in the semifinal as the group A champions.

Then the girls in red and green confirmed their spot in the final after crushing Bhutan by 8-0 goals in the first semifinal.

US sanctions will remain in effect until accountability and reform are ensured: Peter Haas

Loans to get costlier as BB hikes lending rate by 0.25pc