Intl desk, Sept 13: King Charles and his siblings held a silent vigil at the side of their mother Queen Elizabeth’s coffin as it lay at rest in Edinburgh’s historic cathedral, with thousands queuing for hours to pay their respects to Britain’s longest-serving monarch.

With their heads bowed, Charles, wearing a kilt, alongside sister Princess Anne and brothers Princes Andrew and Edward, stood solemnly for 10 minutes next to the oak coffin, draped with the royal flag known as the Royal Standard of Scotland.

The flag was topped with a wreath of white flowers and the Crown of Scotland, historically used for the coronations of monarchs of Scotland, Reuters reported.

They left the city’s St. Giles Cathedral to applause from onlookers.

Thousands of people have been queuing through the night to see the Queen’s coffin at St Giles’ Cathedral in Edinburgh, Scotland.

Mourners filed slowly past the coffin, some of them crying, others curtsying or with heads bowed.

The coffin had earlier been brought from the Palace of Holyroodhouse, the monarch’s official residence in Scotland, in a procession watched mostly in silence by a large, grieving crowd, with Charles and other royal family members walking slowly behind the hearse.

Mourners, some weeping, and others with heads bowed or curtsying, walked slowly past the coffin after having waited patiently for hours to be allowed into the cathedral.

“I had gone to see the queen so you can imagine my surprise when I saw members of the royal family there,” said Frances Thain, 63. “I was just overwhelmed because there was so much to take in.”

Michael Hainsworth, 70, a retired music teacher, was one of the first to enter the cathedral to see the coffin after a seven-hour wait, and people are expected to file past all night until the vigil ends at 3 p.m. (1400 GMT) on Tuesday.

“We were very upset. It was so emotional. It brought it all home,” said Hainsworth as he comforted his crying wife.

Queen Elizabeth died on Thursday in her holiday home at Balmoral, in the Scottish Highlands, at the age of 96 after a 70-year reign, plunging Britain into mourning even as it faces an economic crisis and a change of government.

A YouGov poll said 44% of respondents said they had cried or shed a tear since her death.

Her coffin had arrived from Balmoral on Sunday and stood overnight at Holyroodhouse.

A bagpipe lament was the only sound as kilted soldiers from the Royal Regiment of Scotland bore the casket from the palace and placed it in the hearse for the short journey along the Royal Mile to the cathedral.

A gun salute boomed out from a battery on Edinburgh Castle when the hearse moved off and a single round was fired each minute of the procession. Other than that there was just silence – except a brief shout from a heckler aimed at Prince Andrew.

Under a sunny sky, Charles, 73, who automatically became king on his mother’s death, and his siblings walked slowly behind the hearse, while the Royal Company of Archers provided the guard of honour.

Tina Richardson, 63, a retiree from Dunbar, was among those standing on the centuries-old Royal Mile beside the cathedral. She said her middle name was Elizabeth after the late queen. 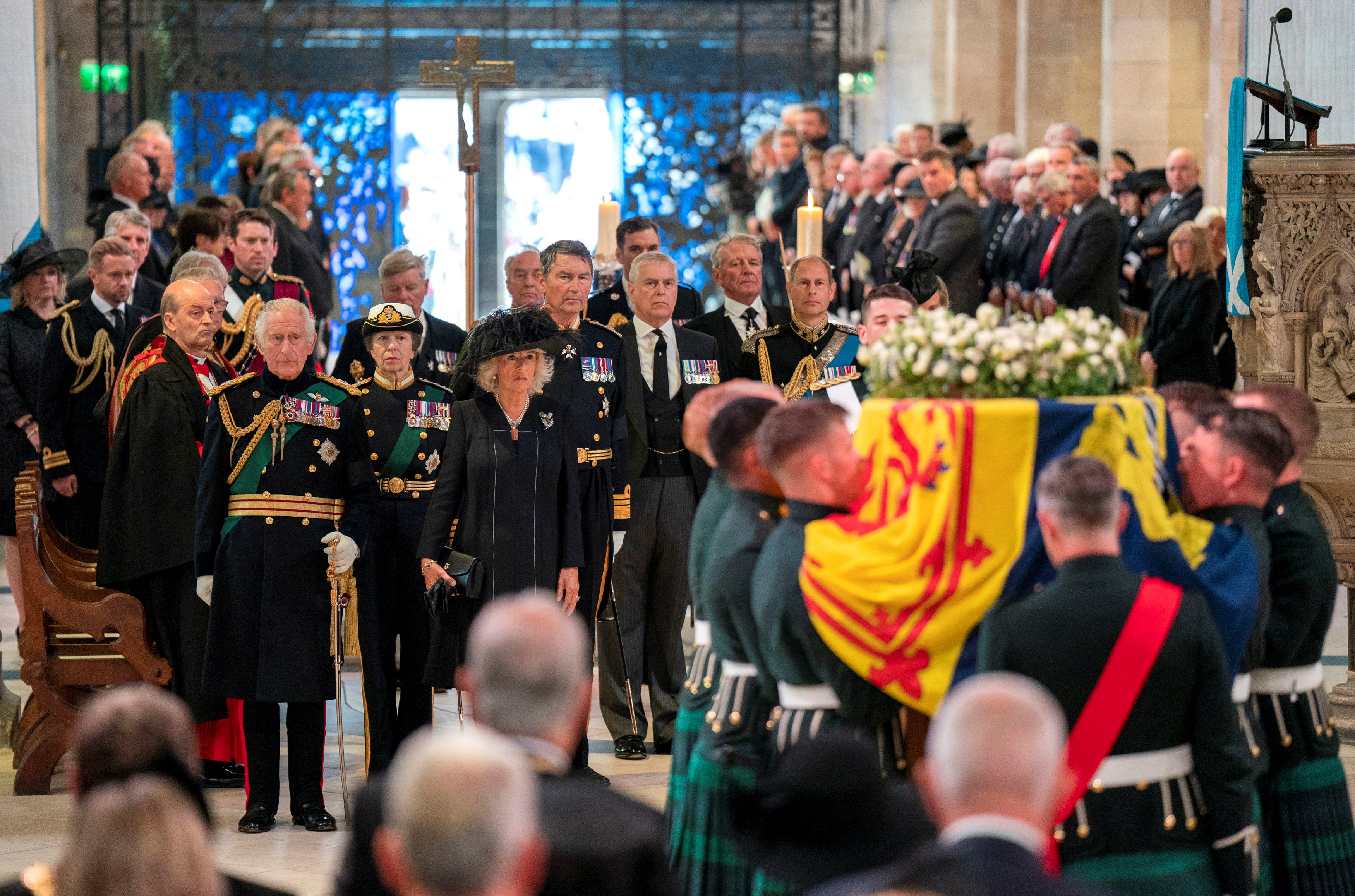 “There’ll never be anyone like her,” she told Reuters. “She was such a beautiful lady who gave us all so much. She dedicated her whole life to the country. In good times and bad she was there, especially during COVID. She united everybody.”

Ellie Merton, 52, an arts producer, who travelled up from the border region of Scotland, said: “We had pipers, horses and archers. There was the sense of the Scottish community being around here as she made her final journey.”

In a packed timetable for the new monarch, Charles went to the devolved Scottish assembly after the service to hear a motion of condolence. He had begun the day in London, when he addressed members of the British parliament at Westminster Hall.

He called parliament the “living and breathing instrument of our democracy” and pledged to follow his late mother’s example in maintaining its independence.

As with all the ceremonies to mark the queen’s death and Charles’ accession to the throne, there was much pageantry.

He arrived at Westminster Hall to a fanfare of trumpets with his wife Camilla, Queen Consort. The royal couple sat on ceremonial chairs, with cavalry troopers in red tunics and plumed helmets standing to attention behind.

“She set an example of selfless duty which, with God’s help and your counsels, I am resolved faithfully to follow,” he told members of the House of Commons and the House of Lords.

The assembly then sang “God Save the King”.

Charles, who is now king of the United Kingdom and 14 other realms including Australia, Canada, Jamaica, New Zealand and Papua New Guinea, is known for expressing his views on matters ranging from the environment to youth issues.

He has suggested that as king, he would moderate his style, in keeping with the tradition that the monarch keeps out of political matters.

On Tuesday, the coffin will be flown to London, where on Wednesday it will begin a period of lying in state until Sept. 19 – the day of Elizabeth’s state funeral – on a catafalque at Westminster Hall.

In London, members of the public will be allowed to process past the coffin, which will be covered by the Royal Standard with the sovereign’s Orb and Sceptre placed on top, for 24 hours a day until 6.30 a.m. (0530 GMT) on Sept. 19.

The government said those wishing to do so should expect to queue for many hours and possibly overnight due to the huge number of people expected.

Britain last saw such a display of public mourning in 1997 after the death of Charles’s first wife, Princess Diana, in a Paris car crash.

In his first public comment since the queen’s death, Prince Harry – Diana’s son – paid an emotional tribute to his “granny” on Monday, saying she would be sorely missed not just by the family, but the world over.

“We, too, smile knowing that you and grandpa are reunited now, and both together in peace,” Harry said, a reference to Elizabeth’s husband of 73 years, Prince Philip, who died last year.