Eminent economist and former advisor to caretaker government Dr Akbar Ali Khan has been laid to rest at the Martyred Intellectual Cemetery in Mirpur.

He was buried around 3pm on Friday after a namaz-e-janaza at Azad Mosque in Gulshan.

He was later conferred on a guard of honour. 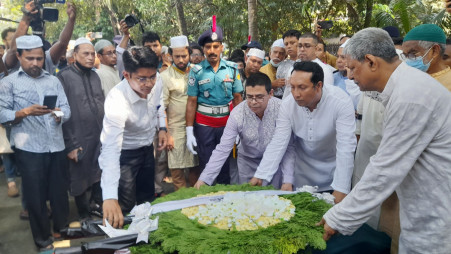 While reminiscing about the late economist, Zafrullah Chowdhury said, “Suddenly it seemed a bright star fell from the sky. I saw how he ran with files from Theater Road No 8 to Hussain Ali Office during the Liberation War. He continued supporting the Liberation War silently.”

He was born in 1944 in Nabinagar upazila of Brahamanbaria.

Akbar Ali completed his BA and MA in History from Dhaka University and went on to do Masters and PhD in Economics from Queens University in Canada.

The prominent economist actively participated in the Liberation War and was sentenced to fourteen years rigorous imprisonment in absentia by a military court of the occupation forces.

Dr Akbar Ali Khan was advisor in charge of the Ministries of Finance, Planning, Commerce, Post, Telegraph and Telephones in the Caretaker Government in 2006 and resigned in protest against the failure of the chief advisor in ensuring a free, fair and impartial election.  He also served as the first chairman of the Regulatory Reforms Commission during 2007-2009.