Intl desk, Aug 14: Many Californians fear the “Big One,” but it might not be what you think.

It’s not an earthquake. And it isn’t the mega drought. It’s actually the exact opposite.
A megaflood.

A new study by Science Advances shows climate change has already doubled the chances of a disastrous flood happening in California in the next four decades. And experts say it would be unlike anything anyone alive today has ever experienced.
Daniel Swain, a climate scientist with UCLA and a researcher involved in the study, describes a megaflood as, “a very severe flood event across a broad region that has the potential to bring catastrophic impacts to society in the areas affected.” He said a megaflood is similar to the 1,000-year flash flood events seen this summer in the St. Louis area and Kentucky, but across a much wider area, such as the entire state of California.
These massive floods, which experts say would turn California’s lowlands into a “vast inland sea,” might have previously happened once in a lifetime in the state. But experts say climate change is increasing the likelihood of these catastrophic disasters, causing them to occur more like every 25 to 50 years.
Climate change supercharges heavy rain events, making flash floods occur more regularly, as has been noted several times this summer in Eastern Kentucky, St. Louis, and even in California’s Death Valley National Park.
California is prone to these floods from atmospheric rivers naturally, and major floods from them have happened before — but climate change is upping the ante, and millions of people could be impacted.
The study said atmospheric rivers could become consecutive for weeks on end, like seen in this animation. Xingying Huang, one of the authors of the study, made this loop, which illustrates the water vapor transportation and potential precipitation accumulation at selected time slices during the 30-day scenario.
The area with the most destruction would be the Central Valley of California, including Sacramento, Fresno and Bakersfield, the study’s authors project. The Central Valley, roughly the size of Vermont and Massachusetts combined, produces a quarter of the nation’s food supply, according to the US Geological Survey.
A flood with the size to fill this valley has the potential to be the most expensive geophysical disaster to date, costing upwards of $1 trillion in losses and devastating the state’s lowland areas, including Los Angeles and Orange counties, according to the study.
That would be more 5 times the cost of Hurricane Katrina, the current costliest disaster in US history.
“Such a flood event in modern California would likely exceed the damages from a large magnitude earthquake by a considerable margin,” the study showed. 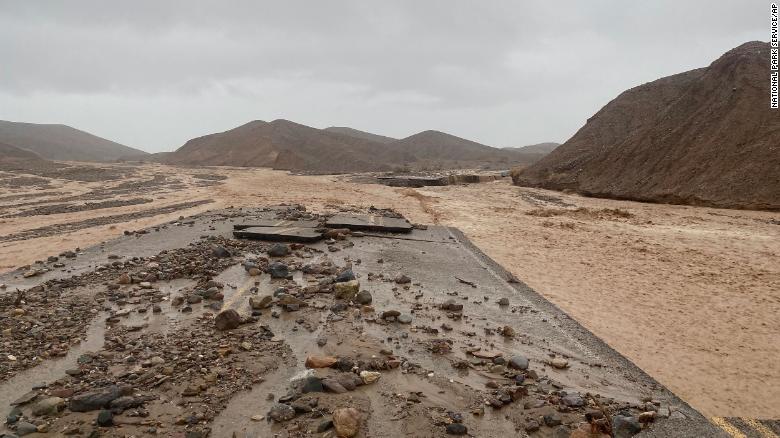 In this photo provided by the National Park Service, Mud Canyon Road is closed due to flash flooding in Death Valley, California.
This study is the first phase of a three-part series studying the effects of a future megaflood event in California. The next two phases are expected to be released in two to three years.
“Ultimately, one of our goals is not just to understand these events scientifically, but it’s also to help California prepare for them,” Swain said. “It’s a question of when rather than if (the megaflood) occurs.”

It’s happened before. It will happen again, but worse, warns scientists

Over 150 years ago, a strong series of atmospheric rivers drenched the Golden State, causing one of the most exceptional floods in history following a dry spell that had left the West parched for decades.
Communities were demolished in minutes. 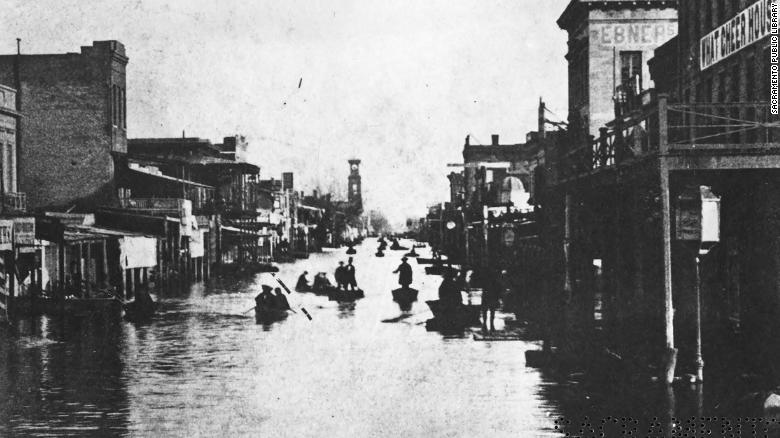 This 1861 photograph shows flooding in Sacramento.
It was the winter of 1861-1862 and a historic megaflood transformed the San Joaquin and Sacramento valleys into a “temporary but vast inland sea,” according to the study. Some areas had up to 30 feet of water for weeks, obliterating infrastructure, farmland, and towns.
Sacramento, the new state capital at the time, was under ten feet of debris-filled water for months.
The catastrophe began in December 1861, when nearly 15 feet of snow fell in the Sierra Nevada. Repetitive atmospheric rivers dropped warm rain for 43 days thereafter, dumping water down the mountainous slopes and into the valleys.
Four thousand people lost their lives, one-third of the state’s property was destroyed, a quarter of California’s cattle population drowned or starved, and one in eight homes were a complete loss by floodwaters.
In addition, one-fourth of California’s economy was obliterated, resulting in a state-wide bankruptcy.
Swain warns a megaflood like this will happen again, but worse and more frequent. 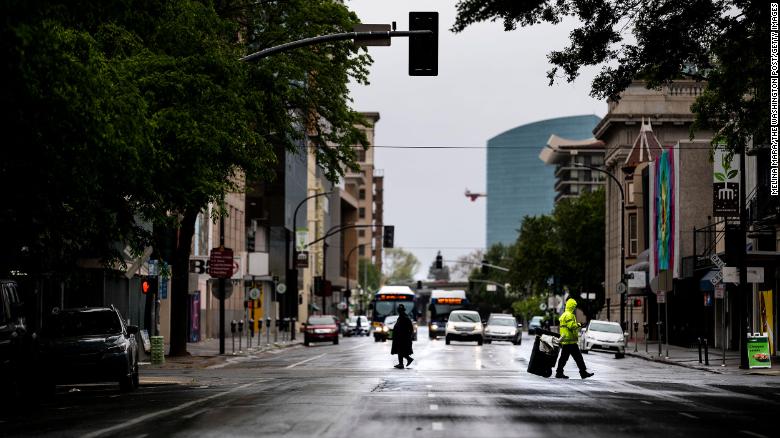 Downtown Sacramento today, which was raised 10-15 feet after the historic floods.
“We find that climate change has already increased the risk of a (1862) megaflood scenario in California, but that future climate warming will likely bring about even sharper risk increases,” the study warns.
Many of today’s major cities with millions of residents are built directly on top of the ancient flood deposits, Swain added, putting far more people in harm’s way.
About 500,000 people lived in California in 1862. Now, the state’s population is over 39 million.
“When this (flood) occurs again, the consequences would be wildly different than they were back in the 1860s,” Swain said.
Climate change increases the amount of rain the atmosphere can hold and causes more water in the air to fall as rain, which can lead to immediate flooding. Both are and will continue to occur in California.
The new study shows a rapid increase in the likelihood of week-long, recurring strong-to-extreme atmospheric rivers during the cool season. An atmospheric river is a long, narrow region of heavy moisture in the atmosphere that can transport moisture thousands of miles, like a fire hose in the sky. They usually bring beneficial rainfall to drought-prone regions like California but could quickly become hazardous with a warming climate.
Historically these winter atmospheric rivers dump feet of snow in the Sierra Nevada, but as climate warms, more of the snow will fall as rain. Instead of melting slowly over time, it all runs off, piles up, and floods immediately. 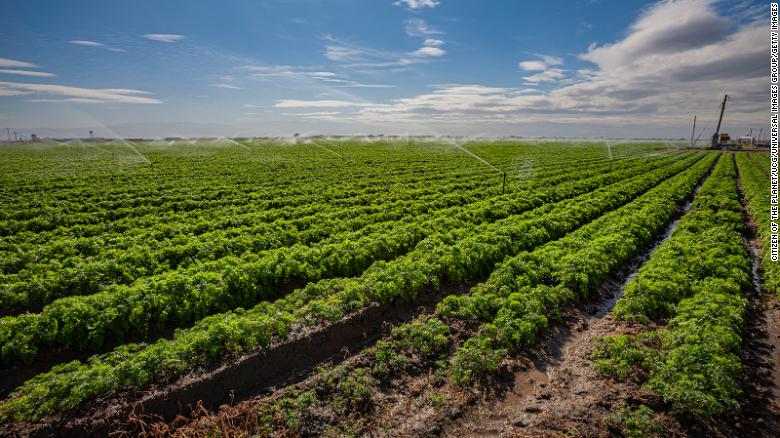 California’s Central Valley, which produces one-fourth of the nation’s food, will be ravaged by a megaflood.
With a neighbor like the Pacific Ocean, California has “an infinite reservoir of water vapor offshore,” Swain added.
California’s mountainous terrain and wildfire risk make it especially vulnerable to flooding. Lingering burn scars from wildfires can create a steep, slick surface for water and debris to flow off. With wildfires becoming larger and burning more area thanks to climate change, more areas are susceptible to these debris flows.
Although models show this megaflood is inevitable, experts say there are ways to mitigate excessive loss.
“I think the extent of (megaflood) losses can be significantly reduced by doing certain sorts of things to revamp our flood management and our water management systems and our disaster preparedness,” Swain said.
Huang, a project scientist at the National Center for Atmospheric Research and a researcher involved in the study, said everyone can make a small effort in combating climate change.
“If we work together to decrease future emissions, we can also reduce the risk of extreme events,” Huang said.
Source: CNN