Intl desk, May 18: President Joe Biden on Tuesday condemned white supremacists, the media, the internet and politics for spreading racist conspiracy theories as he mourned the killing of 10 Black people in Buffalo, New York.

Payton Gendron, an 18-year-old white teenager, is accused of opening fire with a semi-automatic rifle in a predominantly African-American neighborhood of Buffalo. Authorities say he carried out an act of “racially motivated violent extremism” on Saturday at the Tops Friendly Market, when he shot 13 people. Gendron has been jailed without bail on a charge of first-degree murder. He pleaded not guilty.

“White supremacy is a poison. It’s a poison – it really is – running through our body politic,” said Biden, who spoke moments after meeting with families of the victims as well as first responders. “We need to say as clearly and forcefully as we can that the ideology of white supremacy has no place in America. None.”

U.S. Attorney General Merrick Garland and other Biden officials have called violence from white supremacists one of the biggest terrorism threats the United States faces, after related propaganda hit a record in 2020.

Investigators have said that they are looking into Gendron’s online postings, which include a 180-page manifesto he is believed to have authored that outlines the “Great Replacement” conspiracy theory that white people were intentionally being replaced by minorities through immigration in the United States and elsewhere. 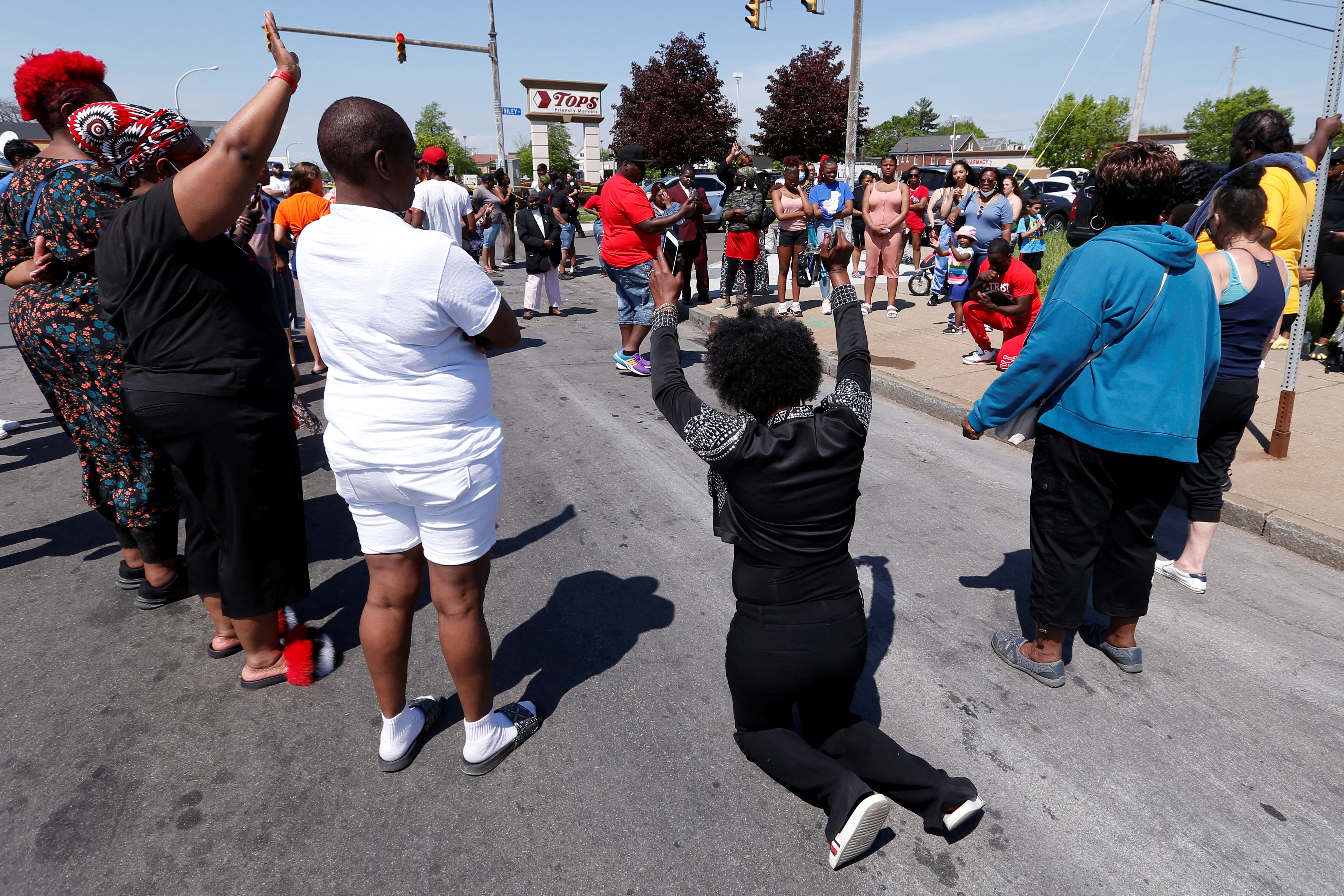 an idea with long historical roots in the United States that is surging through some conservative political circles now.

Biden did not lay out specific blame. Fox News c

ommentator Tucker Carlson was singled out by Democrats on Tuesday for allegedly stoking the theory in hundreds of episodes of his show. Carlson has called the Buffalo shooter “immoral” and “crazy.”

“Hate and fear are being given too much oxygen by those who pretend to love America,” Biden said, blaming politics and profits. 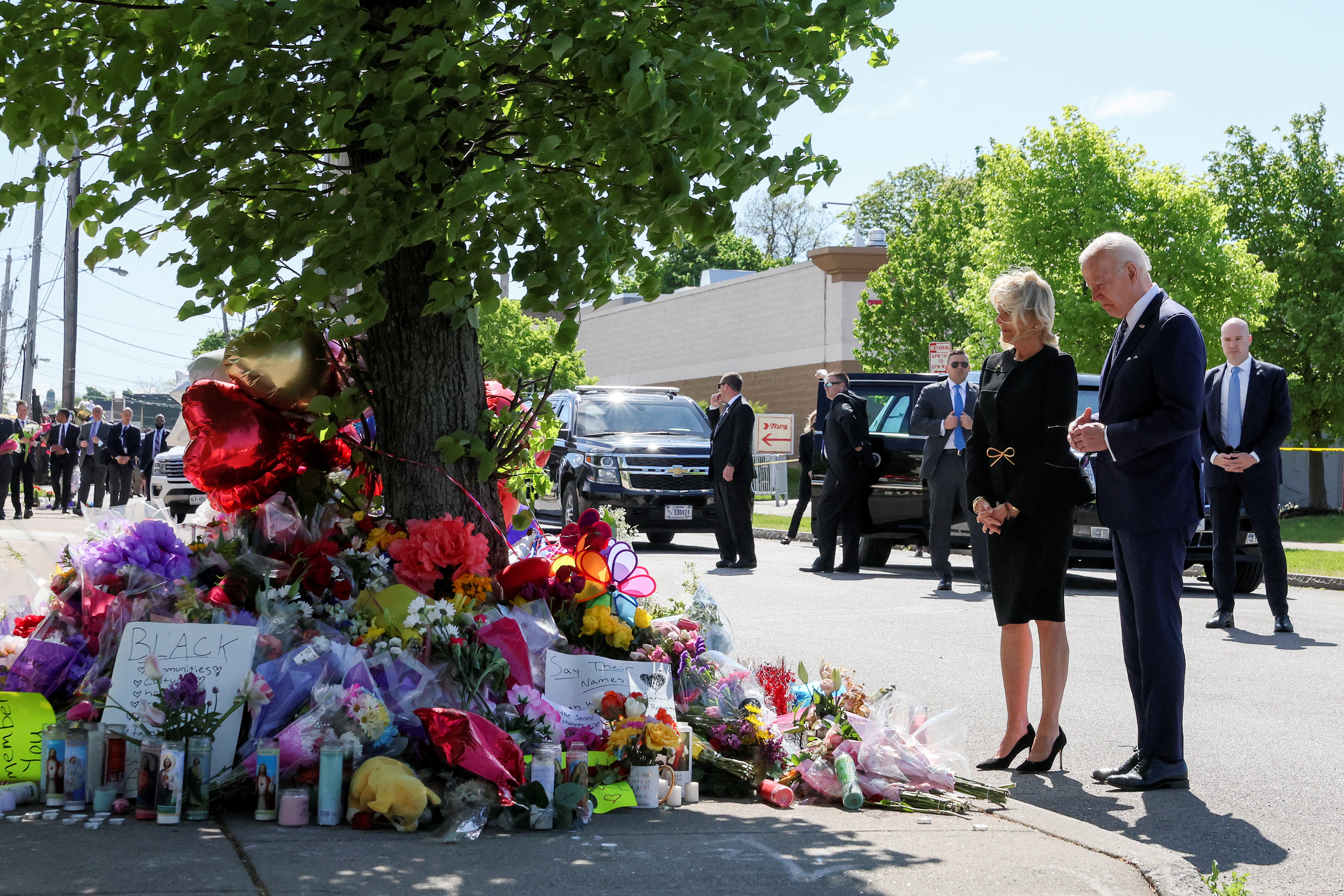 “Now is the time for the people of all races, from every background to speak up as a majority of America and reject white supremacy,” he said.

Biden, joined by his wife, Jill, and a variety of New York political leaders stopped at a memorial set up under a tree to pay their respects near the supermarket where the gunfire rang out.

The scene in Buffalo was an all-too-familiar one for Biden, who once again took up the role of consoler-in-chief. He said in his speech that he knew something about what the families of the fallen were going through, an apparent reference to the death of his son, Beau Biden.

Biden reminded Americans that he ran for president to restore the soul of America, following predecessor Donald Trump’s fa 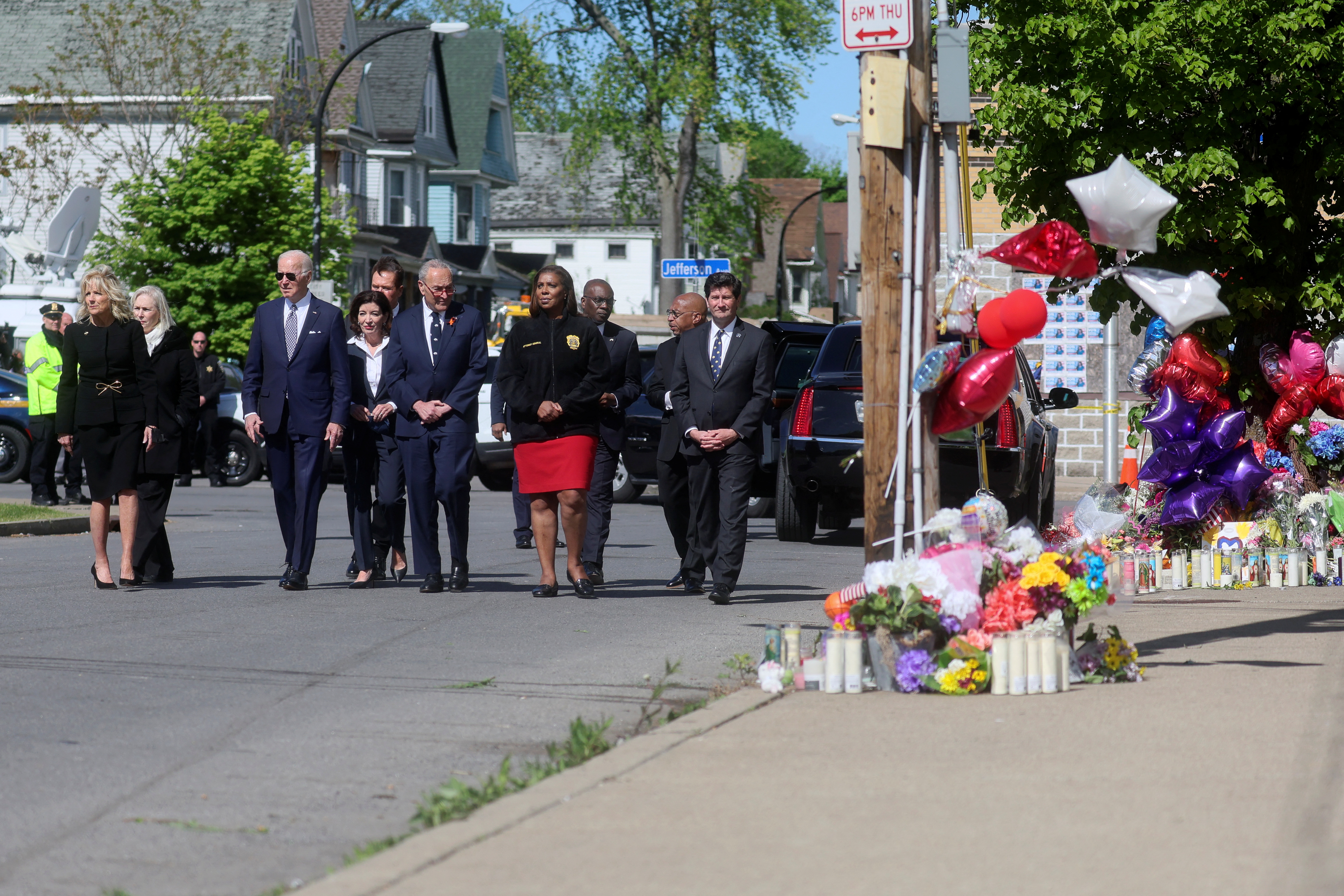 ilure to denounce a deadly white supremacist rally in Charlottesville, Virginia, and took office weeks after a deadly attack on the U.S. Capitol that included racially motivated groups.

But the Buffalo trip also showcased how little Biden has achieved in stamping out a rise in white supremacist groups or curbing gun violence, with many Republican lawmakers blocking efforts to advance gun control measures and the country suffering a rash of mass shootings in recent months.

Biden told reporters prior to leaving Buffalo that he realizes it will be hard to get legislation passed.

“It is going to be very difficult but I am not going to give up,” he said on gun measures.

A top FBI official told Congress in November that the bureau was conducting around 2,700 investigations related to domestic violent extremism, and the Department of Justice said in January it was creating a new unit to counter domestic terrorism.