Intl desk, April 23: Russia resumed its assault on the last Ukrainian defenders holed up in a giant steel works in Mariupol, a Ukrainian official said on Saturday, days after Moscow declared victory in the southern port city and said its forces did not need to take the plant.

Russian forces were hitting the Azovstal complex with air strikes and trying to storm it, presidential adviser Oleksiy Arestovych said, adding “the enemy is trying to strangle the final resistance of Mariupol’s defenders”.

The biggest battle of the conflict has raged for weeks as Russia seeks to capture a city seen as vital to its attempts to link the eastern Donbas region with Crimea, the Black Sea peninsula that Moscow seized in 2014.

The death toll could not be independently verified. The last big strike on or near Odesa was in early April.

“The only aim of Russian missile strikes on Odesa is terror,” Ukrainian Foreign Minister Dmytro Kuleba wrote on Twitter. Russia has denied targeting civilians in its “special military operation” that began on Feb. 24.

A Russian general, Rustam Minnekayev, said on Friday Moscow wanted control of the whole of southern Ukraine, not just Donbas. Ukraine said the comments indicated Russia had wider goals than its declared aim of demilitarising and “denazifying” the country. Kyiv and the West Ukraine call the invasion an unjustified war of aggression.

Russian forces have besieged and bombarded Mariupol since the early days of the war, leaving a city that is usually home to more than 400,000 people in ruins. A new attempt to evacuate civilians failed on Saturday, an aide to Mariupol’s mayor said.

Russia’s defence ministry said on Friday Mariupol’s last fighters had been “securely blockaded” at the steel plant. On Thursday, President Vladimir Putin had declared the city “liberated”, declaring that troops would not storm Azovstal.

Arestovych, a political adviser to President Volodymyr Zelenskiy, said Ukrainian troops in the Azovstal complex were still holding out “despite the very difficult situation” and were attempting counterattacks. More than 1,000 civilians are also in the plant, according to Ukrainian authorities.

The Azov battalion, a nationalist militia prominent in the defence of Mariupol, released a video which it said showed women and children sheltering in the complex. Reuters could not independently verify where or when the video was shot.

One unnamed boy in the video said he was desperate to get out after being in the bunker for two months.

“I want to see the sun because in here it’s dim, not like outside. When our houses are rebuilt we can live in peace. Let Ukraine win because Ukraine is our native home,” he said. 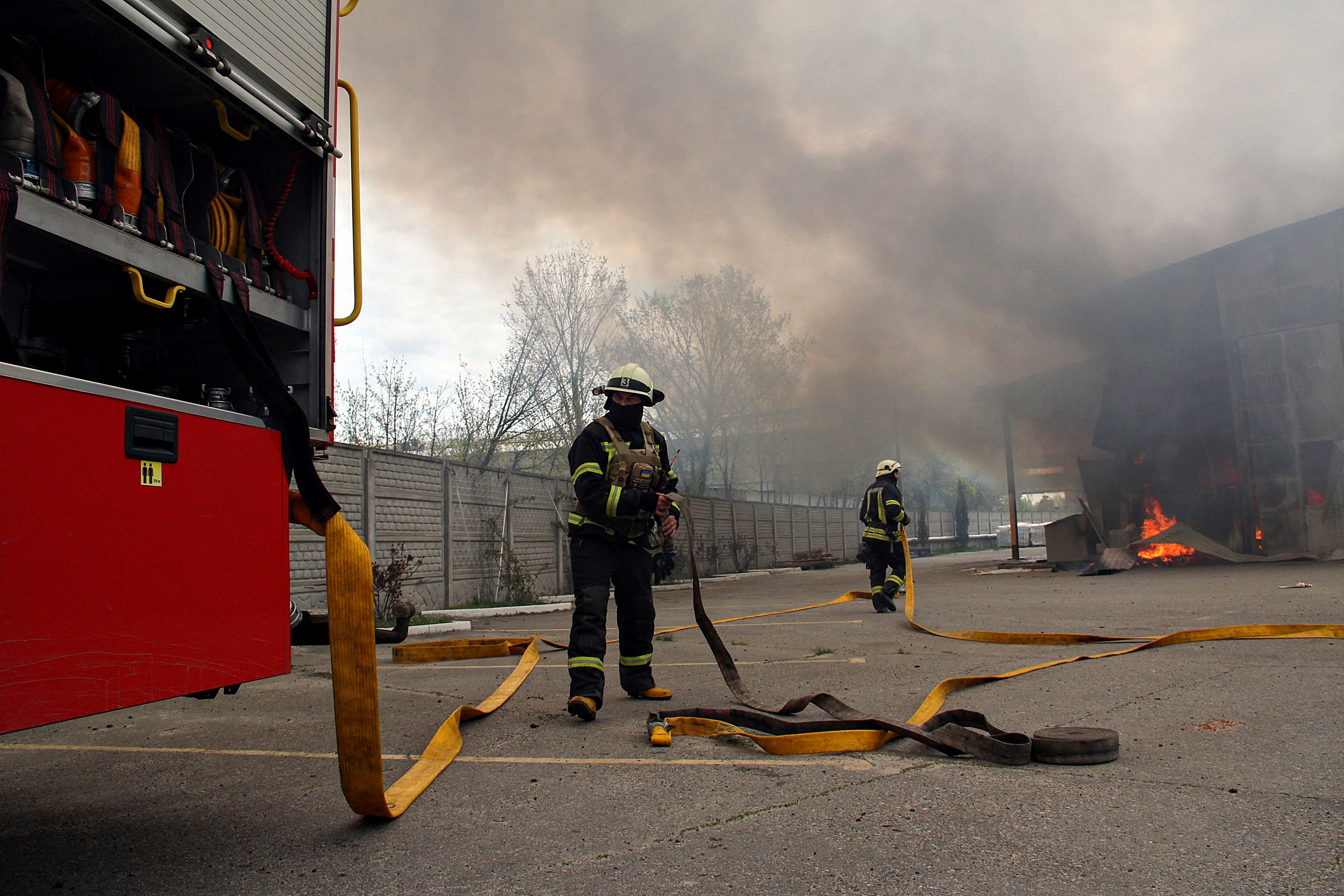 Cars destroyed amid Russia’s attack on Ukraine are pictured after they were collected from different places, in Hostomel, Kyiv region, Ukraine April 23, 2022. REUTERS/Zohra Bensemra
Read More

Ukraine estimates tens of thousands of civilians have been killed in Mariupol and says 100,000 civilians are still there. The United Nations and Red Cross say the civilian toll is at least in the thousands.

Russia’s current offensive is focused on the Donbas, where Moscow-backed separatists have for years held parts of its constituent Donetsk and Luhansk regions.

On Saturday, Luhansk governor Serhiy Gaidai said Ukrainian forces were pulling back from some settlements to new defensive lines to preserve their units in the face of an intensifying barrage on all cities in the region.

The governor of Kharkiv, a heavily bombarded city northwest of Donbas, said Russian forces had carried out over 50 artillery or rocket attacks in the area over the past day, killing two people and wounding 19.

Governor Oleh Synegubov said intense fighting continued at the frontline town of Izyum, southeast of the city, and that Ukrainian forces had retaken three villages to its northwest.

Russia said it had shot down a Ukrainian fighter jet and destroyed three Ukrainian helicopters at an airfield in Kharkiv.

There was no immediate comment from Ukraine on the Russian assertion. The Ukrainian military said on Saturday it had destroyed 177 Russian aircraft and 154 helicopters since the start of the war. Reuters could not verify the figures.

President Zelenskiy said after Minnekayev’s comments that Russia’s invasion was just the beginning and that Moscow has designs on other countries.

“We are the first in line. And who will come next?” he said in a video address late on Friday.

Kremlin spokesman Dmitry Peskov declined comment on whether Russia had expanded its goals.

U.S. President Joe Biden said on Thursday he had authorised a further $800 million in military aid for Ukraine, including heavy artillery, ammunition and drones. Canada said on Friday it had provided more heavy artillery to Ukraine.